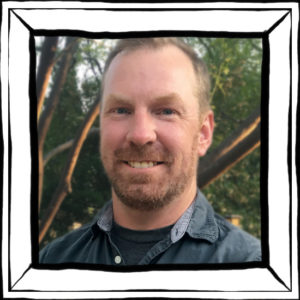 Motto: “Prepare for the worst; hope for the best.”

Favorite Client Moment: Although “client” is a loose description here, I once did an “extreme” dot-to-dot of Martha Stewart for the Martha Stewart show. She gave me and my wife front row seats at her show and had me come up on stage at the end of the show. Good times.

Adam Turner has loved to draw ever since he picked up his first pencil as a toddler. Instead of doing the usual two-year-old thing of chewing on it or poking his eye out with it, he actually put it on paper and thus began the journey. His first source of income through his illustration came to him while he was a freshman in college back in 1987. Thus began his professional career as an illustrator and graphic designer.

Since that time, Adam has worked both as an illustrator and a graphic designer, working for agencies as well as design departments of larger companies. He has either illustrated or designed for various companies such as Mara-Mi, Bethel University, Target Corporation, MindWare and the Billy Graham Evangelical Association.

As Creative Director at MindWare, Adam led the creative team in designing a line of product to represent Early Childhood Activities for the Target Corporation. Target approached the Product Development Team at MindWare to propose a line of products that would command a heavy shelf presence in most Target stores. Adam proposed the packaging design for the line that was chosen by Target.

Adam is also one of the creators of the ‘Extreme Dot to Dot’ line for MindWare (and he is listed as an inventor for the patent of the product line). Adam was faced with the challenge of taking the simplistic, familiar puzzle of the traditional dot-to-dot, and transforming it to a new type of challenging, engaging puzzle. He needed to do this in an efficient, economical way. Adam created the illustration technique as well as the process of creating a singular lined, complex puzzle, complete with over 1,000 dots and correctly positioned numbers. The Extreme Dot to Dot series has now become one of MindWare’s top selling lines.

When Adam isn’t illustrating or designing, he occasionally helps out on the goat farm he, his wife, and daughter live on. He also tries to get a motorcycle road trip or two in each year. However, probably the most interesting side note (and most relevant to his artistic process) is that Adam is an internationally award-winning snow sculptor. He started off on a team that took first place in a local competition, then took first place at the Minnesota State level, then second place the following year at the National Competition, and then lastly, third place at the Budweisser International Snow Sculpting Competition in Breckenridge, CO. However, since moving from Minnesota to Arizona, he is now limited to a once-a-year visit to Minnesota with his daughter, where the two of them compete at a local event (which both he and his daughter won first place this last year in their respective categories: adult and teen).

Ready to design peak performance on your project?
talk to us